Fandom/Genre: MCU Avengers
Relationship(s): Steve Rogers/Tony Stark
Content Rating: T
Warnings: Pre-Slash, Canon Level Violence, Humour, Fluff, S.H.E.I.L.D Freeform.
Summary: Prompt by Only_1_Truth: Tony has been overworked and overstressed, and to top it all off, he doesn’t take orders well, so working with the Cap has been strained. Cue a magical bad-guy and a stray spell, however, and suddenly… Stark is a cat. A little, stressed-out cat. Thankfully, it turns out that Rogers definitely doesn’t hate Tony, and is actually quite a cat person. 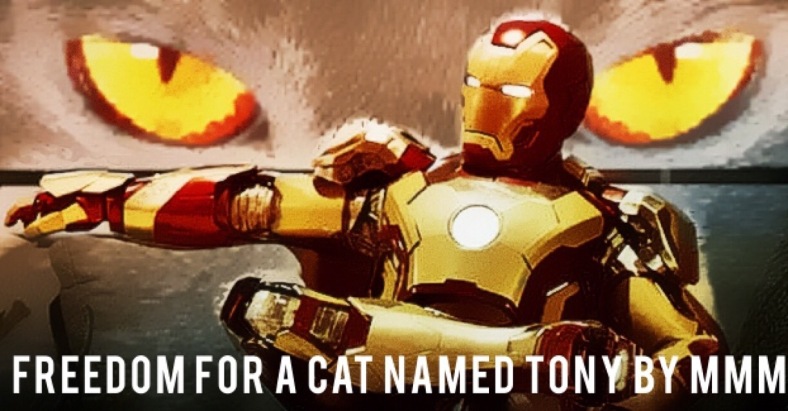 As usual, Fury had kept everything close to his chest and deployed Captain Tight Pants to round up his ‘Team’. Tony found himself soaring above the action not necessarily needed but still available for clean up. As boredom set in, Tony decided that a commentary was just the thing they needed to spice up the rather tedious crash, bang, wallop happening below.

“Piggy-back the CCTV, record all angles below and layer with my audio”

Tony then perched himself on a random building facing the carnage below. Lower Manhattan was in for a hell of a show.

“It’s another day in sunny Manhattan and low! The Avengers are full steam ahead. Witches’a flying, Hags’a flailing and look The Hulk is playing hide’n’seek with a ginger tabby. Oooh Captain A’s looking veeeery stern. Way to go Cap’ you tell those ladies what’s what”

Sniggering, Tony swung himself round to see where the rest of their motley crew was hanging out. Across from his perch, he spotted Hawkeye also watching the action; looking closer he noticed Clint was shaking. No! Laughing.

Taking this as a good sign, Tony recommenced his commentary.

Tony’s thoughts spewed out with little filter as usual. He commented on both the action in front of him and what he could see through the windows within the surrounding buildings.

“Well well well. What’s this? Is the Cap actually getting angry?!? No way! Ladies and Gents, I give you Captain Tight Pants all round good ol’boy getting irate! Gird your loins the Cap just said Crap! He swore. The bad language is spilling forth. Steven Rogers has lost his shit at a bunch of little havoc causing, magic wielding biddies. Hahahahhaha!!!”

Tony knew he was annoying. Come on genius here. It doesn’t take a rocket scientist to work it out. And he should know.

But lately. Lately the Cap’s tolerance had apparently reached its limits. And Tony gets it, not everyone can be as awesome as him 24/7. But Capsicle had gone too far this time. Telling him to shut up. It’s just rude. And the rest of them agreed! Even Pepper!

Well, Tony would show him. He would show them all. Unfortunately Tony forgot about one teeny tiny detail.

One thought on “Freedom for a Cat Named Tony 🐱”

Everyone deserves a Happily Ever After

The home of the Every Fandom Bang and Reverse Bang!

The Text is On Fire

“To create is to live twice.” ― Albert Camus