“What Peter! What?!” Stiles screamed from the landing.

“May The 4th Be With You!” Peter replied faux innocently.

Stiles scuttled down the stairs texting furiously on his phone, sprawling himself across the sofa and by default Peter.

“Check your phone” Stiles tried and failed to sound mysterious “The device shall let it be known” he flailed his arms to add effect.

Peter huffed before thumbing the screen of his phone, there he found a new message:

“Puppies! Pack meeting tonight. Be her or no more cookies. Also, bring snacks! ❤“

“What exactly is this supposed to mean?”

“Well” At this point Stiles sat up and turned to face Peter directly “Scott, the potato that he is, has never seen Star Wars, can you believe that? Never. And I’m pretty sure that except for present company only Erica and Lydia have actually watched them all. So I was thinking that instead of the usual – blah blah, report, blah blah, patrol, blah blah – that as none of us need to be anywhere tomorrow, we can marathon the ENTIRE SAGA!”

Stiles had started to bounce in his seat. Apparently just the prospect of Star Wars made him excitable.

“What’s got you all excited?”

The question came from the top of the stairs, Derek had finally decided that finding Stiles would be a better use of time than waiting for him.

“And why am I not involved?”

Derek shrugged, he wasn’t ashamed of his relationship with Stiles or their fondness of being ‘That’ couple.

“Oh! OH!” Stiles gasped “We can, we… oh never mind” Stiles shook his head, bounced over the back of the sofa, grabbed Dereks hand and then proceeded to dragged him back up the stairs. “See you later Peter, organise it for us ok? Love you!”

“Because I’m asking nicely” He heard echoing from the upper levels.

Peter had decided that capitulating to Stiles demands would be a better and less traumatising use of his time. The sounds being emitted from their room were just not conducive to staying sane – and Peter was holding onto what little sanity he had left.

He made a mental list of what he thought Stiles would like, but just to make sure he also decided that a visit to the Sheriff’s Department wouldn’t be amiss.

“Sheriff!” Peter smiled “Good to see you. Now a few questions if I may?”

“Speak up Hale, I havn’t got all day”

“Oh god, Stiles has gotten to you hasn’t he? Please tell me I don’t need to be there? I mean, they’re classics but I can only watch them so many times”

“Actually, I think this is my fault, but you know Stiles is my favourite, so I don’t mind” Peter shrugged off the Sheriffs worry, if anything he was qute looking forward to the evening. “No, what I need is the DVD’s, and to borrow some of your soft furnishings”

“And Stiles can’t do this himself why?”

“Ocuu….No don’t finish that sentance” He shuddered “I do not want to know”

Throwing his keys at Peter, he wandered off into the back office muttering to himself. Just as Peter turned  leave the station he heard the Sheriff call out “Be safe young Padawan”

The Pack turned up as usual by bursting through the door completely uncaring of the noise and mess they made just trying to get themselves situated. Uncharacteristically even Lydia joined in on the raucus.

They all stopped suddenly when they noticed that instead of the usual desk and computer screen dominating the middle of the room, soft furnishings, pillows and blankets had been scattered between the sofa and what looked to be a brand new home theater system.

“NO WAY!” was an almost collective shout.

Derek cleared his throat and nudged Stiles harshly in the ribs.

“And Derek. Derek loves me” Stiles grinned up at Derek, popping up on his toes he bussed a quick kiss against Dereks stubbly cheek.

“Now everyone find somewhere to sit, get your snacks and shut up”

Once everyone had settled – a fight had broken out between Jackson and Scott over a big red cushion. Neither had won as Stiles had swooped in a and stolen it whilst they grappled on the floor.

Comfortably stretched across Dereks front with his feet in Peters lap, Stiles turned his jubilant grin toward the rest of the pack.

“May The 4th Be With You Puppies” He intoned maniacally.

Leaning up against Boyd she seemed to sync with Stiles’ excitement.

“I still dom’t get what you guy’s are so excited about, its just a movie.” Scott piped up from the middle of the pillow pile. Alison started t giggle into his shoulder – he had no idea the can of worms he had just opened.

“Just a MOVIE. JUST A MOVIE. Star Wars is NOT just a movie you heathen. Star Wars is a right of passage, it is the beginning and end science fiction as we know it. Just a movie. Watch the movies you big potato and if by the end you still think its just a movie, be warned you will loose ALL best friend privileges to Erica”

Scott stared in shock at Stiles.

Alison and Isaac leaned in on either side of Scott to comfort him in his minutes of shock. Lydia and Jackson continued to ignore the proceedings, tutting every know and then in agreement with Stiles. Scott just did not seem to understand the basics of the ‘rights of passage’.

Growing board with tedious teen conversations going on around him and suspecting that Peter felt the same, Derek brought their collective attention back to him as he annouced he was starting the movies.

“Right, Marathon Rules. One: There will be no arguments over the viewing order. Two: Get your own snacks. Three: No MAKING OUT. And Four: NO ARGUMENTS. We clear?” Derek recieved nods from them all “Good. Stiles start them”.

Everyone settled down and watched the opening credits.

2] The Empire Strikes Back

4] Attack of the Clones

5] Revenge of the Sith

6] Return of the Jedi

They ended up skipping Phantom Menace due to the fact that both Jackson and Erica started growling as soon as the opening credits rolled through. No harm no foul though, it was an awful piece of cinematography.

It took them until mid-day the next day before they finished the marathon. None of them even thought about moving from the pile they had found themselves in.

As the closing credits of The Force Awakens ran across the screen, they curled up and finally went to sleep. The unspoken agreement that they would discuss the awesome as soon as they could function as normal human/werewolf beings.

Peter and Stiles stared at eachother over Dereks shoulder, smiling they silently agreed that this had been a fantastic idea. 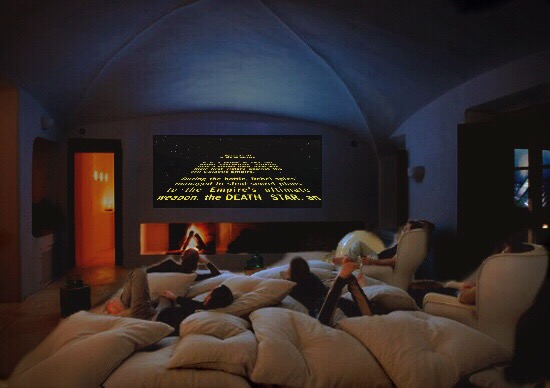 Everyone deserves a Happily Ever After

The home of the Every Fandom Bang and Reverse Bang!

The Text is On Fire

“To create is to live twice.” ― Albert Camus